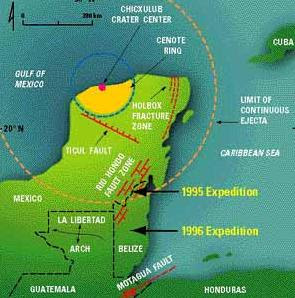 Chicxulub crater, the impact crater blamed to have caused the extinction of the dinosaurs is located in the Yucatan Peninsula just east of the Gulf of Mexico.

Naming the crater: it is located on the town of Chicxulub, Yucatan but it also means "the tail of the devil" in Mayan dialect.

This has been the most supported theory regarding the extinction of many species including the dinosaurs and until we find an evidence clearer than this huge crater, Chicxulub holds one of the most shocking evidence in history.
Posted by Giovanni20 at 10:01 PM